As it happens, I stand in the admiration of iProducts. While iPhone was being released, one of my family members wanted my iPhone and I wanted to buy another phone. Of course, I wanted to buy the new, shiny iPhone 6. However, considering the price of the new magic wand, I wanted to settle for the older one named iPhone 5s.

And so began the search for the deals on the Internet and what I found was pleasing to my eyes. Amazon was selling the piece of beauty at Rs. 37700. That was about 5K cheaper than what I would have got in a brick and mortar store. The very next day I saw a link on Facebook which promised to have some deal activated and that Amazon was amazingly selling the 5s at only Rs. 29,999 which is a nicer way to say Rs. 30,000. I went to the link and found that indeed it was being sold at that price. Sometime later when I had my mind made to get one, the thing went out of stock and so, I had to order the phone at Rs. 37700. Well, the time for waiting began!

There happens to be an awesome person I was waiting to meet since quite some time. After having a good meet and having received a gift from him, I saw an Apple store and went happily inside it and asked them the prices. Well, before I go on, let me tell you something – I saw a Mac Pro (the cylinder one) for the first time in that store and it truly looks lovely; I mean – that cylinder has one of the most powerful desktop computers of this world and it looks elegant. Anyways, back to the phone. So I asked the price and as I had expected, the price was high. It was almost 4.5K more. It was priced at 42K. Well, so I asked the guy why were they selling it at that price while it was available at much cheaper rate online.

To this, he said “Wait, sir. I am going to show you something” and opened Apple’s website and showed me a link where Apple had clarified that amazon was not authorized to sell iPhones. Now, as the business model of Amazon happens to be in India, the phone was being sold by some retailer located somewhere about whom I had not enquired and had just ordered (read: placed a bet on) my phone. Now, I was a little worried. So I asked “Well, it’s AMAZON so why would they give me a faulty piece or something”. To this, the gent shared some of his experiences which I would like to share.

He said: “Quite recently, there was a customer who had just ordered his new iPhone from amazon and came to the store. He wanted us to set it up for him because the phone was new and he was a little excited. So that man (pointing towards the cashier) unboxed the phone and when he entered the serial number of the phone in the system, the system said that warranty was already started 201 days ago. That means the phone was unboxed and used at least once previously and that too about 200 days ago. That is a good 6-and-a-half months ago. So he was outraged by the breach of trust by Amazon and said that he will contact amazon and come back and contact back the store (where I was standing) if needed. “Some days later he comes back and says that Amazon says that they did not sell the phone, the retailer did and they are not taking it back and are asking me to contact the retailer and gave me contact details which do not seem to work. Apple at the same time says that they will not alter the warranty dates and want me to purchase from an Apple authorized reseller/retailer only. And this is just one. There are a few other such things and such problems are happening all around. If you do not trust me sir, you can go to another Apple store and ask them without telling about this incident.”

And so I did. I went to croma and asked the apple sales guy over there if it was okay to order an iPhone online. He said something more startling: “Well, if you trust online stores, do so. But I have faced two issues with people who bought online. First guy had his warranty started some 2 months ago (similar case as the first guy’s) and the second guy got a fake phone and both Flipkart and Apple denied to take any action. Then people come up to Apple and ask for replacement. How can Apple replace the product if it was not their fault? And then they blame Apple. I will show you a link of authorized e-tailers.”

And he showed me the same link. Here is the link: https://www.apple.com/in/buy/catalogresellers/

And at the time of writing, it looks like this: 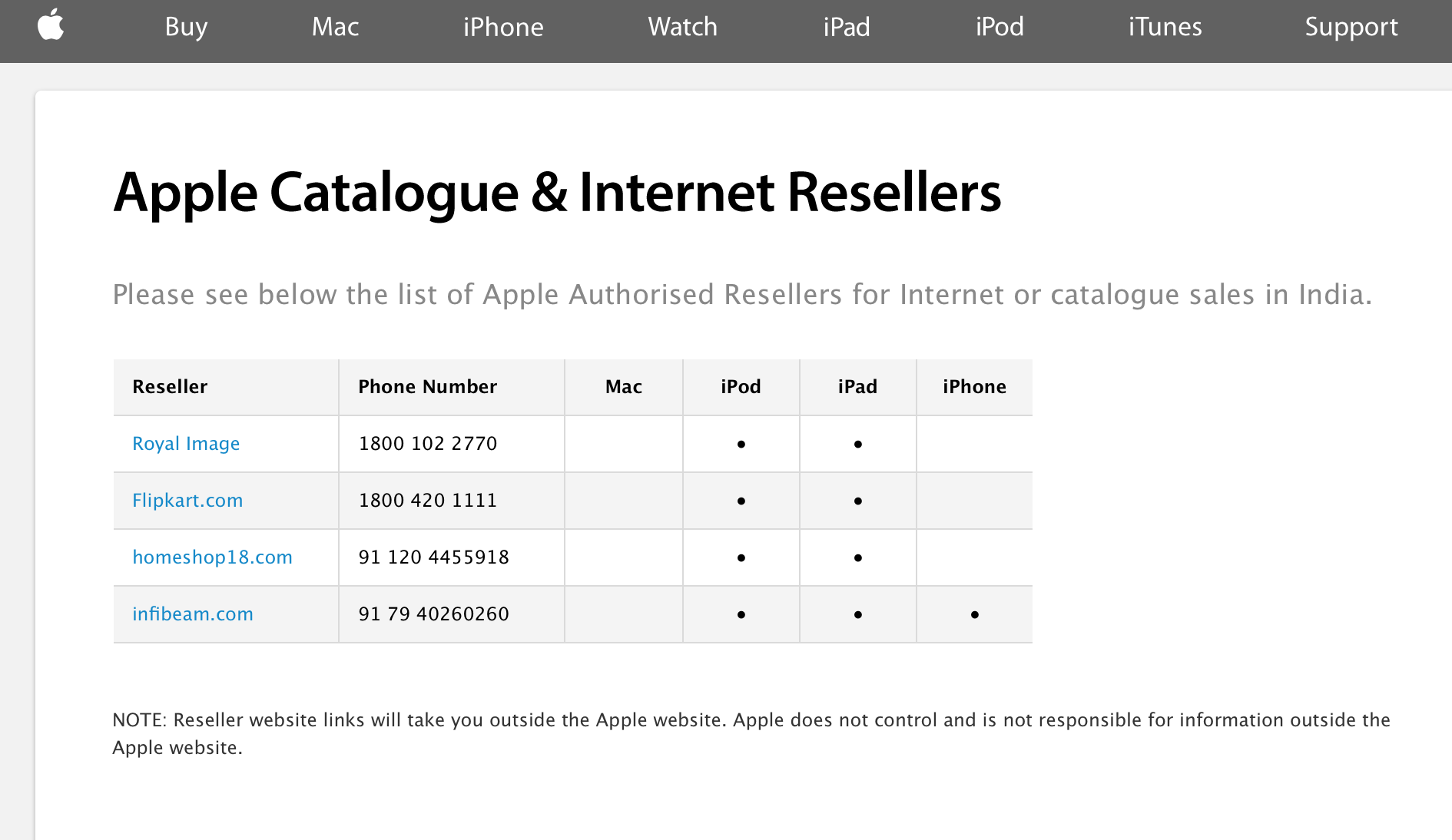 And after seeing the link, the first thing I did was to cancel the order on amazon; right there in croma. I did buy an iPhone 5s but from croma. It costed me 42K and they were generous enough to give me a screen-guard for free.

All I have to say is – it is important to research well before you buy. Research is important when you are putting your money on world’s loveliest phone built by world’s most arrogant company! You do not want to end up in the cycle of blame between Apple and an online retailer.